Chaturanga Dandasana: A Safe Approach to a Common Pose 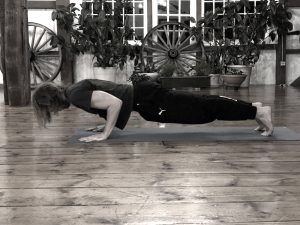 Chaturanga dandasana (low plank pose) is one of the most frequently practiced asanas (poses). It’s part of the sun salutation which is a common series worked into practically every yoga class. Of all the poses in the sun salutation, chaturanga is often the one pose that practitioners tend to struggle to do safely and correctly. Because it’s part of a flow, it can be easy to lose awareness of proper alignment when lowering from high to low plank. In order to protect the joints (especially the shoulders), it is imperative to maintain heightened awareness in chaturanga and to be considerate of the fundamental alignment requirements.

Awareness and attention are crucial when it comes to practicing this pose. Because the pose is a transition from high plank to upward facing dog (urdvha mukha svanasa), it is easy to get lost in the motions. All poses require heightened awareness in order to avoid injury, and transition poses are no exception. Certain challenging poses, such as chaturanga, require an added degree of awareness as well as knowledge of proper alignment in order to stay safe. Also, when we rush, we may not engage the necessary muscles to protect the joints. Rushing through chaturanga is an invitation to injury, and when we’re injured we can’t practice.

The shoulders are arguably the most vulnerable joints when practicing chaturanga. Several factors such as weak upper back and core muscles as well as tight muscles throughout the chest cause the shoulders to become compromised in this pose. The tendency is to drop the tops of the shoulders towards the mat putting an excessive amount of weight and pressure on the shoulder joints. When this becomes habitual, the shoulder joints become overworked, and the likelihood for injury increases each time we practice chaturanga.

There are many ways in which it is common to compensate for inadequate strength and flexibility when practicing chaturanga. Dropping the abdomen and chest and lifting the butt is one; winging the elbows out to the side is another. It can be helpful to note the common tendencies towards misalignment so we can recognize when we’re engaged in them. It’s important that we learn what is needed from the body and which muscles need to be active so that we can maintain proper, safe alignment when moving into this pose.

The Art of Lighting Yourself on Fire

The Healing Power of Reiki